[av_textblock size=” font_color=” color=” admin_preview_bg=”]
Somewhere along the line, I’m sure that you had a great service, a product, an invention of what you were convinced was a great idea. An idea that could change people’s lives, make an impact on the world and make you your millions. However, that day became a week, that week became a month, that month became a year, and one day your idea popped up on TV or the internet or in a bookstore and you exclaimed, “Ughhh, you got to be kidding me!”

Well, the same thing happened to me. Several years back I did a speaking engagement for a group of which was titled “The ABC’s of Success.” The engagement went very well. My follow up plan was to write a book on the subject. I had all my notes so it only made sense.

Years later, I became a coach and used a portion of the contents of that speech to write a 27-week blog series titled “The ABC’s of a Successful Business.” We then created an e-book of which you can actually subscribe to on my website businesscoachmichaeldill.com

As time went by, unfortunately, I never fully matured this idea to write the book.

Then it happened, one particular day my wife Susan brought a book home that she thought I would like. And what do you think the name of that book was? You guessed it, “The ABC’s of Success” written by Bob Proctor. 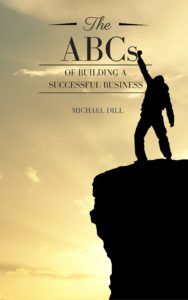 How and why does this happen? The answer is simple. The Universe is actually full of great ideas and inventions just waiting to find a home, just like The ABC’s of Success found a home with me years ago. However, if that idea isn’t fully matured and acted upon, that idea at some point will get impatient, float back into the Universe and eventually find a new home with someone else, just like mine did.

Be clear, when you have an idea, it’s yours. It landed in your lap for a reason. However, act upon that idea immediately when it is fresh in your mind. If not that idea will eventually float back into the universe only to find a new home somewhere else. So, the next time an idea lands in your lap, nurture it, act on it change the world and make your millions!